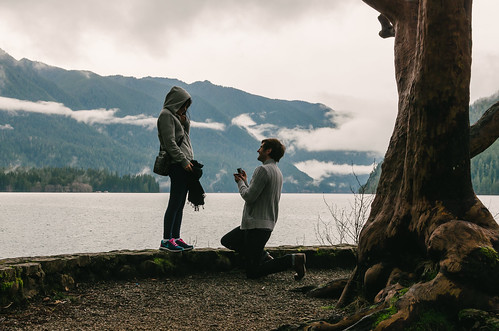 Many of us dream about how it’s going to happen, or indeed how we’ll do it for the men who are reading! Most of us will have heard hilarious stories of how after building up to the perfect moment for so long, the nerves got in the way or the timing wasn’t quite right. There are of course the picture perfect stories of being alone on the beach at sunrise, but one thing is for sure, as long as they say yes, isn’t any proposal perfect? Here are some beautiful proposal stories from some super sweet celebrity couples.

Poker Pro Randy Lew proposed to his girlfriend in one of the most heartfelt ways: with a handmade ring. Whilst on a romantic walk along the beach, Randy asked Celina to dig in the sand, where she found a box with a handmade ring inside. The ring itself, although beautiful in its own way, was made of cellophane – perhaps if you’re thinking of trying the handmade ring route then get a professional to help you out. Not everyone is so excited by gold cellophane after all! Luckily there are plenty of places that can help you design your own engagement ring and, for the really adventurous, you could even book a course to make your wedding rings together.

Never one for sticking to the conventional, pop star Pink decided that she was going to pop the question herself. Despite previously claiming that she’d never marry a motocross racer, Pink picked one of Carey Hart’s motocross races as the scene for her proposal. She held up a board reading ‘Will you marry me? I’m serious!’ as Hart began his race around the track. On the first lap Hart was so absorbed in the race that he didn’t notice the board, but on his second lap he did and immediately swerved over to the side, accepted and kissed his new fiance. Straight after the kiss Pink told him to get back to the race as she didn’t want to marry a loser. Perhaps its that sense of humour that’s kept them coming back to each other all these years?

Sometimes the simplest proposals can be the sweetest and nobody proves it quite like David Burtka in his proposal to Neil Patrick Harris. Before an event that they were both attending that was out of town, Burtka asked the limousine to pull over quickly. His boyfriend was totally confused as to why, wondering if maybe he was going to pick up some drinks for them quickly. Then he realised that this was the exact street where the pair had first met years ago, so when Burtka got down on one knee, he of course said yes! Choosing a place with significance for you and your partner is a sweet, simple and non-suspicious way of asking that big question, whether it’s in the first restaurant you ever went to, or in the garden where you first exchanged ‘I love you’s’ its sure to be a moment that will always be remembered.

When family is as important as it is for these two, it was obvious that the family must be included in the proposal! Dwayne Wade had planned for his three sons to hold up signs reading ‘Will you marry us?’ whilst the couple and the kids toured the building site that was soon to become their new home. Before leaving the house Gabrielle Union remembers Wade asking her if she was going to put her makeup on, which she thought a little strange for visiting a building site. When she saw the boys holding the signs she at first thought it was a joke, but turned to Wade who was down on one knee; of course she said yes!